Why Ariel Sharon is Israel's Best Hope for Peace 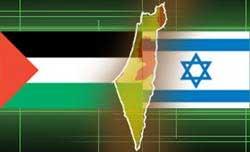 I never thought I'd see that headline either, let alone write it.

Ariel Sharon is at least partially responsible for starting this current wave of violence and hostility. His visit to the Dome of the Rock certainly helped stir the pot, and I think it was designed to do just that, and sweep him into office in a wave of fear about Palestinian attacks. That strategy worked, and Sharon was elected.

At first, he was a typical right-wing hawk, brutalizing the Palestinians with rocket attacks and home demolitions and refusing to do anything serious about the peace process. The cycle of violence escalated and there seemed no way out. Most progressive Zionists, myself included, thought Sharon was worse than Netanyahu, and we were very angry and depressed about the state of things in Israel.

The Road Map seemed like a token gesture not actually intended to work. Neither side made much progress, and truce talks with the extremists failed time and again to achieve lasting peace. The Geneva document drafted as an alternative seemed like a ray of hope, but it sank to the bottom of the well of public discourse and hasn't been heard from since.

At some point, however, Sharon seemed to realize, maybe because of increasing global pressure on him to stop the home demolitions, rocket attacks and unilateral security fence building, that he needed to change tactics. He started to talk to the Palestinians seriously about restarting the peace process, infuriating the Netanyahu hawks in his own party and causing great consternation among the progressive Zionist community about what he was up to.

The real coup was Arafat's death. When Arafat was alive, he was in complete control of the Palestinian political, security and public relations machine. With his death and the ascension of Mahmoud Abbas as his replacement, suddenly things became possible that had previously been impossible. Sharon had an opportunity to seize, and he did so.

The Gaza disengagement plan started out as a shrewd, unilateral political maneuver on Sharon's part. He was saying to the Palestinians, "look, we can't take this anymore. We're out. You're on your own." The Palestinians were delighted, the settlers were infuriated, and the Likud party was divided and tumultuous.

But here's why it will work. Sharon is in the perfect political position to pull this off. He's the hero of the right-wing hawks, but he's convinced many of these hawks that it is in their enlightened self-interest for the Palestinians to have their own state separate from Israel. This political position frees him from a lot of pressure on the right, and it gives him new credibility on the left. Moreover, with a moderate like Abbas in control of the PLO, Sharon has had a real partner on the other side to haggle with, one who has shown a distinct ability to influence the extremists away from attacks against Israeli civilians. And since Sharon has shown that he won't hesitate to take violent, decisive action against Palestinian extremists who attack Israelis, he has both a really tasty carrot and a really sharp stick that will help him get the best deal possible for Israel.

Clearly, there are radicals on both sides who won't be satisfied with any kind of solution. The settlers want all of Israel for Israelis, and Hamas and Islamic Jihad want to throw the Jews into the sea. Nobody can negotiate with these factions. But despite the massive press that these groups get, they are only a small part of the overall political picture. Most Israelis want peaceful coexistence with Palestinians, and most Palestinians want an end to the violence and their own state, and they're willing to work with Israel to acheive those goals.

The Gaza disengagement plan, while it started out as a unilateral move, has necessitated the aid and cooperation of the Palestinians, both in reining in the extremist Palestinian factions before and during the pullout, and in ensuring that once the Israelis leave, the Gaza Strip will not become a hotbed of extremist recruiting and an entry point for suicide bombers into Israel. Abbas has shown a great willingness and ability to do what is needed to ensure that the pullout is as painless as possible for both sides.

In addition, once Israel leaves, both sides will need to work together to build a self-sufficient Palestinian economy in the Gaza Strip. Doing so will require Israel to rethink and possibly dismantle the security fence and promote trade ties between the two sides, which will both help the Palestinians build their economy and help ease the enmity and mutual distrust that each side feels for one another.

In short, Ariel Sharon is in the best possible position to make this happen, because he has managed, through shrewd political manipulation, to drag much of the hawkish right over to the side of peaceful coexistence, and in doing so has gained the trust of many in the center and even some on the left of Israeli politics. With that much Israeli support backing him, he has a lot of credibility in talking to the Palestinians. And with a real Palestinian partner for peace like Abbas, he can back up his credibility with concrete results.