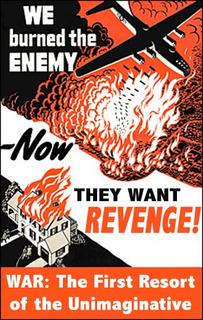 I have two analogies that I like to use when talking about the Iraq war.

1) The way we're fighting terrorists in Iraq reminds me of that game at the fair where those gophers pop up out of the hole and you whack them with a mallet. What happens next? Another gopher pops up and you whack it, and then another, and then another. It never ends. You can't possibly whack all of the gophers.

2) We have a fire ant hill in our backyard. We decided that the best way to get rid of it would be to blow it up with dynamite, scattering angry fire ants all over the backyard and only killing a few of them. So we now have a backyard full of fire ants.

Unfortunately, neither of these analogies is truly adequate. Both assume a constant number of terrorists, when our actions are clearly increasing the recruiting ability of the terrorist organizers. So really, it's like with every gopher we hit, two gophers come up in its place. And after we blew up the ant hill, new queens were created that took some of the ants with them and created new ant hills in the backyard.

We're not doing any good in Iraq, folks. I don't care how well crafted the "constitution" is that is supposed to be drafted soon. The insurgents aren't going to have any part of it. And if we can't beat them, and it looks like we can't, then we might as well pull out now.

And by the way, how's Mr. Karzai doing in Afghanistan? How much power does his "democratic government" have outside of Kabul? I would venture a guess that the warlords who control most of Afghanistan don't pay Mr. Karzai much of a thought these days...

Bring our troops home, Mr. Bush. Bring them home now, before we waste more lives in this bungled adventure.
at 8:33 AM