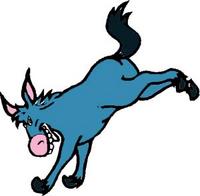 It's all part of the "50 State Strategy" created by my good man Chairman Dean. The Democrats have hired three organizers to help energize the party faithful here. It's a good and hopeful sign that perhaps this old donkey is tired of being kicked around the red states and is ready to start doing some kicking of its own.

I seriously hope that this 50 State Strategy works, and that, even if we don't turn Oklahoma blue in 2006, we at least force the Republican Party to spend more time and money fighting for a victory, instead of just simply being handed one. After all, this state does have more registered Democrats than Republicans--it's just that many of the registered Democrats either 1) don't vote, or 2) are closet Republicans that vote Republican in every election.

My real hope is that the Democrats come up with a charismatic candidate for Congressional District 1 in 2006. We need to get John Sullivan out of office, and fast. If the Democratic Party nationally is seriously committed to this 50 state strategy, then that's where they should focus the majority of their energy.
at 4:26 PM