The myth of "mainstream values" 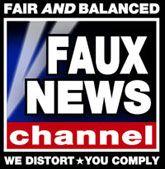 Here's a theory I'm working on. Keep in mind, I haven't fleshed it out very well, but this is the gist of it.

Perhaps the problem that Progressives have in getting heard as loudly as the right-wingers boils down to a usurpation of the phrase "mainstream values" by the far right.

Take Fox News. It's clearly a far right network, yet it calls itself "fair and balanced." True, this laughable misnomer has been discredited a multiplicity of times by those of us who see through the absolute lie of it. The fact remains, however, that the network has managed to capture a sizeable audience from the center and the center-right and quietly push them farther to the right by calling its brand of radical conservative propaganda "mainstream."

Fox News is only one example of this phenomenon. I started to think about this theory after looking at a right-wing blog written by someone who had commented on my Intelligent Design post. He posted his own statement on Intelligent Design on his blog in response to mine. In his blog, he described me as a "self-avowed leftist." While his blog does have links to the New York Conservative Party, among other right-wing links, nowhere on it, that I could tell, does he describe himself as a right-winger or a conservative. Admittedly, I haven't read every word on his blog, so I can't say that definitively, but that description of me as a "self-avowed leftist" got me thinking about the myth of "mainstream values."

Here's the theory in brief.

The radical conservative movement in this country, and by that I mean the Administration, their buddies at Fox News, the right wing talk show hosts, the right wing websites like WorldNetDaily, and the Christian fundamentalist hate groups like Focus on the Family ("the KKK for the modern suburbanite"), have become successful because instead of proclaiming their political orientation on the right, they either proclaim themselves "mainstream," "balanced" or simply don't mention their political orientation at all. These groups have just brazenly ignored the fact that the majority of Americans don't really share most of their values, and have planted their right-wing flag onto the phrase "mainstream values." By doing so, these groups have managed to convince a lot of folks in the "mushy middle" that indeed, Rush Limbaugh, Bill O'Reilly and WorldNetDaily do represent the mainstream, and have thereby pushed a lot of the center over to the far right.

The left, on the other hand, hasn't done that. We have stubbornly insisted on calling ourselves "progressive" and have thereby cemented ourselves on the left side of the political spectrum. Thus, we do not capture the "mushy middle," because they identify us with political positions with which they do not agree.

Added to this is the fact that these right-wing news organizations and groups demonize anyone who doesn't agree with them as being "self-avowed leftists," a sinister term evoking the spectre of Soviet Russia, which further discredits us in the minds of centrists and sends them running straight into the arms of these right-wingers.

With the added influence of radical right wing churches and the fact that the right wing media is so much bigger than the left wing media, it certainly looks like we've got a significant handicap that's going to take some work to overcome if we're ever going to have hope of getting the word "mainstream" back on our side.

So what is the solution? Should Progressives abandon the word Progressive and proclaim ourselves "mainstream," pulling up the flag of Fox News that has been planted on that word and supplanting it with the flag of reason, democratic values and equal rights?

For years, I've argued that Progressives should be proud to be Progressives, but perhaps by doing so we're automatically limiting our audience and thereby limiting how far our message gets out and how much good we can accomplish for our side. I'm not yet prepared to abandon that position because I still think it's both ethically and ideologically the correct position to take. But perhaps we need to take a page out of the right-wing playbook, and start calling our values mainstream values -- because really, the values of social justice, equal rights, peace, diversity and community spirit are mainstream values. It's the values of bigotry, theocratic absolutism, extreme corporatism and warmongering, the values propagated by Fox News and WorldNetDaily, by the Project for a New American Century and Focus on the Family, that are far outside of the mainstream. And we need to help people to realize that, one way or another.
at 1:09 PM