Halloween is over. I'm hungover. But let's brighten the day with a really adorable picture of my dog in costume: 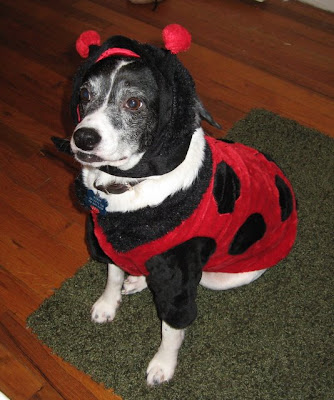 Last night my partner and I joined some friends at this party put on by the folks who do ghost tours here in Tulsa. They were supposed to show us videos of "anomalies" and such, but they couldn't get their video equipment working. It was kind of lame. Then they had this "seance." I got called up on stage to participate in some kind of spirit summoning circle. The leaders kept calling to these two specific ghosts that are rumored to haunt the venue where the party took place.

Predictably, nothing happened, although the event leaders were trying their damnedest to convince us that there was "something" there. Lots of "Did you hear that?" To which I responded, "No." One person in the circle actually said, "They want me to channel them, but I'm not comfortable doing that in a crowd." Come on, really? We're here for a show, and you're "not comfortable?" Anyway, we sat there in the dark for way too long basically doing nothing, and then we went home.

I don't know. Maybe I would have gotten more out of it had I not just consumed half a pitcher of Cosmopolitans. Somehow, though, I doubt it.

I want my five bucks back. And about a zillion brain cells. Oy.
at 9:51 AM