I'd say there were about 25-30 people present. Several colorful characters, including a woman in a clown suit with a sign that said, "Stop clowning around! End the war!" (approximately), and a woman in a polar bear suit trying to draw attention to Inhofe's idiocy regarding global warming. A lot of different messages - ending the war primarily, of course, but impeachment was another huge issue. I was a little disappointed that this year there wasn't like one huge well-publicized protest like there was last year. There is apparently another rally at Veteran's Park, but last year there was the huge rally at the Unitarian Church.

I took a lot of pics with my camera phone because like an idiot I forgot the digital camera. Then, like an idiot, I realized that the only way to transfer the photos from my phone would be to e-mail them to myself, which is time-consuming and expensive. Nevertheless, here are two pictures from the rally: 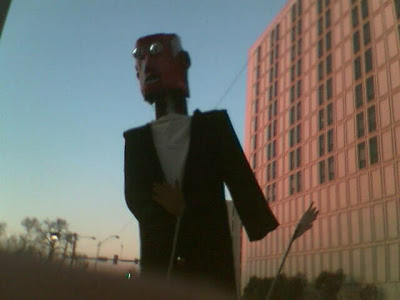 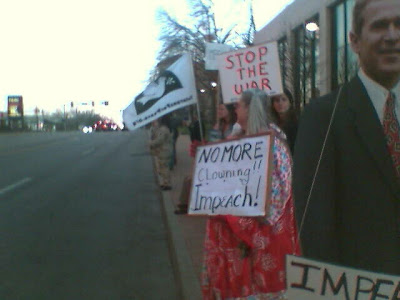