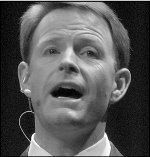 Horrible quote of the day:

"As a society, we've made diversity and tolerance the guidepost of public life," Tony Perkins, president of the Family Research Council told ABC News. "Maybe we shouldn't be surprised that we have congressmen chasing after 16-year-old boys."

Diversity and tolerance lead to congressmen chasing after 16-year old boys? No, Tony Perkins, you fascist prick. You unbelievable piece of elephant shit. This has nothing to do with diversity and tolerance. It has to do with one man's problems controlling an inappropriate libido. It also has to do with a Republican establishment that is so uncomfortable talking about sexuality and so determined to hold onto power at all costs and suppress bad publicity that it refused to deal appropriately with Foley's actions. It has absolutely nothing to do with homosexuality. Foley's actions would have been equally inappropriate had he been sexually harassing female pages. Scapegoating "gay lawmakers" for the actions of one pedophile is like...well, it's kind of like invading Iraq when we were attacked by terrorists who had no connection to Iraq. Deflect the blame to a convenient scapegoat and you don't have to deal with the real issues involved, and you can shore up your own support base of clueless bobbleheaded drones brainwashed at megachurches and hanging on your every word, oh Dear Leader.

You are a horrible person, Tony Perkins. And so's your buddy, James Dobson, and everyone else involved in the neo-fascist Family Research Council, and Focus on the Family. Horrible, horrible, stupid, pinheaded, brainless, mean, evil, nasty, awful, disgusting, hateful, spiteful, ignorant, rude, idiotic, xenophobic, homophobic, anti-semetic, racist, fascist, fuckheaded people who have absolutely no conception of the world as it really is and live in a little bubble of certainty that you have decided to thrust upon a world that really doesn't conform to your little white uber-Christian heterosexual vision of how things should work.

As Keith Olbermann would say:

Tony Perkins: Today's worst person in the world!
at 9:11 AM