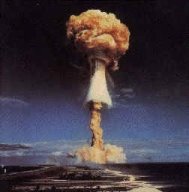 Well that can't be good.

But tell me this: what, exactly, does the Stalinist nation of North Korea have in common with Islamic theocrats in Al-Qaeda? Nothing, right? So why would people be afraid of North Korea giving nukes to Al-Qaeda? Maybe I'm naive, but it seems like this is another example of neoconservative foreign policy lumping all of our enemies together under the same umbrella, even if they absolutely hate each other. Like Sadaam and Al-Qaeda, for example. "If you're not with us, you're against us," as Bush said sometime after 9/1l, and then lumped Iran, Iraq and North Korea in an "Axis of Evil," even though two of those nations were at war with one another as recently as the '80s, and the other is a completely different ethnic and ideological entity.
at 8:48 AM