This is who the Palestinians want representing them. 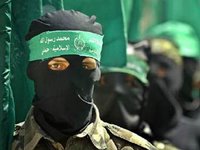 A Hamas Web site recently published the videotape wills of two suicide bombers, with two main messages: One is directed to the Jews whose blood Hamas pledges to drink until they flee from the land of the Muslims, and the other is devoted to a mother who helps her son plan a suicide attack, according to Palestinian Media Watch, which presents the video shown on the Hamas site after its victory in the Palestinian parliamentary elections.

The video shows Idham Ahmed Majila and Maumin Rajab Rajab, who blew themselves up at the Karni crossing at the end of 2004. "My message to the hated Jews: There is no God but Allah," Majala says. "We will hunt you everywhere, when you wake and when you sleep. We are a blood-drinking people and we know that there is no better blood than Jewish blood.
Advertisement

The video also shows a good-bye scene between mother and son as he gets ready to leave for the attack, with the mother helping him put on the explosive vest. In the background is a song, "O beloved mother, my mother. Don't cry for us."

I don't think I really need to say anything more about this.
at 9:05 AM