Why the AFL-CIO split is good for labor 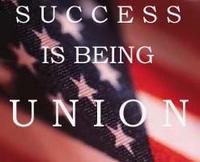 I've been a labor activist for several years and I've become pretty cynical about the leadership of the AFL-CIO, specifically whether John Sweeney is ever really going to be able to stop the massive decline in membership that the labor movement has been suffering for so many years. At the rate it's going, there won't be an AFL-CIO to speak of in a few decades, and the anti-labor forces will really be able to go after all of the job protections that hard working union activists have won through decades of struggle.

That is, unless the individual unions of the AFL-CIO take matters into their own hands. Which is exactly what the Teamsters, SEIU and UFCW, following the lead of the Carpenters' Union several years ago, have done.

By splitting from the AFL-CIO, these unions have shown that they mean business. They've shown that they're not going to sit back and let the bureaucrats at the top of the labor food chain take their dues and sit on them.

This split is good for labor. By leaving the AFL-CIO, these unions have a chance to form a lean, mean, stripped-down organizing machine that can not only attract new workers but can serve to pressure the AFL-CIO into action. If it does not respond, the AFL-CIO risks becoming irrelevant, replaced by this new, militant, grassroots labor movement. If it does respond, then the AFL-CIO and this new organization will become competing federations of unions, both vying to organize more workers and, through that competition, becoming more active, visible and effective than either side could be on its own.

Therefore, I say bravo and fight on to the members of the SEIU, UFCW and the Teamsters, and to all the other unions who are involved in the breakaway coalition. By forcing the AFL-CIO to take a hard look at itself, this coalition will surely re-energize the labor movement and, in the long run, make it stronger.
at 9:32 PM