Israel has no more settlements in Gaza 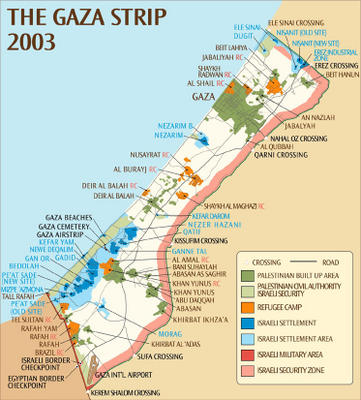 It's done. Israel has left the Gaza Strip, and with its departure, the Palestinians are one step closer to having their own state. This departure is absolutely monumental. Its effect on the political dynamics of the conflict between Israel and the Palestinians is, at this point, unknowable, but will surely be profound.

Perhaps with this departure, those who sympathize with the more militant sectors of the Palestinians will start to see Israel as less of an enemy. Unfortunately, it's much more likely that Hamas and Islamic Jihad will use the withdrawal as a vindication of their attacks and continue their call for the destruction of Israel itself.

I just hope that the international community sees through their hateful rhetoric to the truth--that the vast majority of both Israelis and Palestinians really do seek peaceful coexistence: one Jewish state living peacefully next to one Palestinian state.

Next up: the dismantling of four settlements in the West Bank.
at 2:03 PM