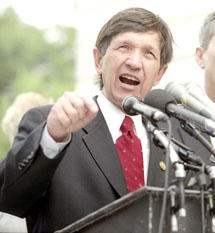 "I have traveled across America. And I have seen the effects of agreements like NAFTA and CAFTA: padlocked gates of abandoned factories, grass growing in parking lots of places where workers used to make steel, used to make washing machines, used to make textiles, used to make machine parts.