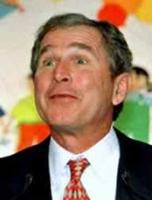 It's sad when the President of the United States, whose party controls both houses of Congress as well as the White House, and who is about to seize control of the Supreme Court, cannot even get his nominee for UN Ambassador voted on by the Senate and has to go through sneaky back doors to get him appointed.

It's yet another example of the "mandate" that George Bush doesn't have.
at August 01, 2005

Hello Sinister readers... So, 2021 happened, am I right?  *waits for awkward laughter masking existential dread and a vague yet oddly famili...

Ethan
A left-handed writer and geek working on a lot of things.

See my sample writing portfolio here.
On Loss, an anthology in which my short story "Resolution" is published, can be ordered on Amazon here.
My short story "Ferryman" was recently featured on The Overcast podcast.