Inspiring words from a legend

Last night, Neil Gaiman himself took a few milliseconds out of his day to respond to a tweet I sent him.  His response - three simple words, "Just keep going."

No kidding, no snark, dead serious - this meant something to me. 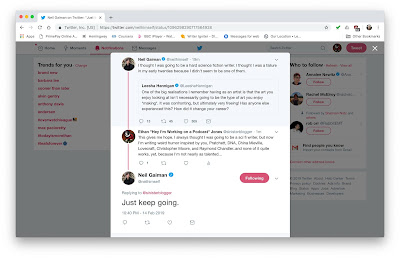 What You Most Dread

My 10 year old nephew asked me to write him a story based on the prompt, "What you most dread." This is what I came up with for him.

What You Most Dread

Mark’s parents, who still didn’t get that his fear of clowns was real and smart because clowns were just weird, hired a clown for his tenth birthday party.  Mark spent the party hiding in the locked bathroom with his mother banging on the door telling him there was nothing to be afraid of.

The bathroom wasn’t much better, because there was a big spider crouched in a corner of the ceiling, and Mark stared at it, willing his eyes to shoot lasers at the spindly monster and kill it.   They didn’t, of course, because superpowers aren’t real.

Mark and the spider stared each other down.

“Mark, get your tuchas out here right now!”  His mother’s voice again from the other side of the bathroom door.

“Get rid of the clown!” Mark shouted back.

“Alright, spider, you stay there, and don’t bother me, and –” He cut his next word short, because the spider twitched.  Mark’s heart jumped into his throat.

“Oh Marky Marky,” a crazy, guttural, growl of a voice called from the other side of the door, “Why don’t you come out here and we can have some FUN?”  Mark figured that had to be the clown.

“Go away!” Mark called back.

Mark kept one eye on the spider and another trained on the door, in case the clown turned out to be truly evil and melted through the door to eat his head.  He’d heard clowns could do that.

“Because everyone loves clowns!”

Mark realized he’d taken his eyes off the spider.  He looked back…and the spider was gone.

Oh no.  He felt spiders crawling all over him, in his hair, in his pants, in his shoes…he shivered and whimpered and pressed his back against the bathroom door, looking around wildly for the spider he knew was about to eat his face.

So he had a choice.  The spider or the clown.

Movement out of the corner of his eye.  The spider dangled from a web near his face.  He screamed and swatted at it, and it swung wildly on its tether.

Clowns it is.  He grabbed the doorknob, yanked, and sprung into the hallway, then whipped around to find the spider.  It hung there, swinging, on its web, wiggling its little legs.

“Well hi there, Marky,” said a gravelly voice behind him.  He turned.

“What’s wrong, Marky, aren’t you having fun at your party?”  The voice seared into him, like a fire, eating his soul, the clown was eating his soul!!  He whimpered and backed away, tears welling in his eyes.

“Mark, come on, it’s Mister Funny Pants! You know! From the mall!  He’s not scary!”  It was his mother’s voice, coming from behind him.

“What? I don’t eat souls…I just make balloon animals and I like to have fun!”  The clown’s voice bore into Mark again, and Mark felt dizzy.
The clown pulled out a flat balloon and started to blow it up until it resembled a long hot dog.  He started tying it up, the screeching of the rubber like the sound of a squeaky door opening in a house when you’re alone and you know nobody else is there to open it.  It was an unholy, terrifying sound.  Mark closed his eyes and scrunched up his face, trying to get away from the sound.

Mark opened his eyes, carefully, because despite himself, he was curious what the clown had made.

It was the most perfect little balloon doggie Mark had ever seen.  He took it and examined it.  All the little folds and knots the clown had made were just right.  Mark started to see the clown’s smile not as a menacing grimace, but as more of a silly thing.  Not as threatening.

“Thanks?” Mark said after a minute.  His breathing had started to calm a little.  Maybe, just maybe, this one clown wasn’t about to eat Mark’s soul.

“Now watch this!” The clown pulled three colorful balls out and started juggling them.  Despite himself, Mark smiled a little, because honestly, the clown wasn’t too bad.  The clown dropped a ball and stumbled around the hall trying to pick it up again while juggling the other two balls in his other hand.  Mark giggled.

Behind him, the spider crawled back up its web and found a comfortable spot to watch the action in a corner of the ceiling.

Maybe clowns are ok, Mark thought, giggling at the clown’s antics.  Maybe they’re not what I most dread.

Maybe what I most dread is growing up.